Part 1 of an excruciatingly deep dive into the greatest pop album of our generation.

E•MO•TION is an improbable triumph. It would be hard for me to overstate how much I adore this album and despite many thousands of words already written by writers better than me I still feel the need to write about it.

Inspired in part by this incredible essay, I had the idea to take a deep dive into the album and pull it apart track by track. Kinda for fun, but mostly because it deserves it. E•MO•TION is an album that tells us so much about the artist who made it, the world it exists in and of ourselves.

It is a masterpiece of songwriting and production virtuosity. It’s not flawless, but neither is the artists and nor are we. It’s flaws tell us as much, if not more, about the artist and of ourselves as its triumphs.

So over the next however-long-this-takes, please indulge me as a do a track by track, deep-dive into this magnum opus of pop.

Run Away With Me

The first 15 seconds of ‘Run Away With Me’ tells you everything you need to know about E•MO•TION. This saxophone riff is E•MO•TION. Full of both grit and glitter, it’s an album painted in vivid colours on a dark canvas. It’s a memory made sweeter with time. It’s a feeling you chase down only for it to fall apart in your hands.

Drenched in delay and reverb that places the sax somewhere off in the distance you hear it as though heard through the thin walls in some romantic imaginary city. It’s reaching out to you from somewhere. It’s calling to you to find it.

But then as quickly as it appeared, it’s gone. Longing you longing for a feeling you can’t quite tell was real.

You're stuck in my head
Stuck on my heart
Stuck in my body, body

But does it really matter if it was real? ‘Run Away With Me’ isn’t about real love. It’s about the kind of relationships you hear about in songs and see on TV. It’s the pursuit of endless romance and adventure. It’s a Peter Pan fantasy. And Carly Rae knows it. But it doesn’t matter because she’s going to make it real simply by willing it to be real. You just have to follow the script.

She starts the second verse with an instruction: “this is the part / you gotta say / all that you’re feeling”. Like she has rehearsed this moment in her head. She’s seen how this is meant to go in films. She has said her lines and now it’s time for you to say yours. Her voice turns to a whisper. Do you part, lest this feeling slip though our hands. For a moment you can almost see just how fragile it all is.

And then with a slap of the snare we've turned the corner to discover the party. We've found the saxophone that was calling to us, but everything else has come into focus now too. The bass pulsates under waves of synths; some that twinkle, some that swell. The snare claps and the bass drum drives everything forward. The saxophone wails from beneath it all and the sounds come together like bodies on a dance floor. Above it all Carly Rae soars. "Baby," she pleads, "take me to the feeling," as if this isn't enough. It's never enough.

Baby, every single minute
I'll be your hero and win it
When the lights go out

And as it reaches it’s peak Carly Rae demands “Run away with me!” And just like that everything goes dark again. Something interrupted the spell.

At the end of the bridge the music drifts off into the distance. We lose our footing and the song becomes a dream. Carly Rae's voice comes drifting back into focus. More intimate this time. The layering and big reverbs are gone. Right now it's just you and her lost in a dream.

"Over the weekend, we could turn the world to gold."

She screams. And it's time to wake up.

"Take me to the feeling," she belts. Never making it explicit what the feeling is. Does she expect you to know? Why don't you know? Her vocal ad-libs become more desperate ("Take me to, take me to it!" "Just Run. Away. With. MEEEEE!")

She sings these cliches like they are revelations. "I'll be your hero," she insists, but it's clear we aren't the ones asking to be saved. 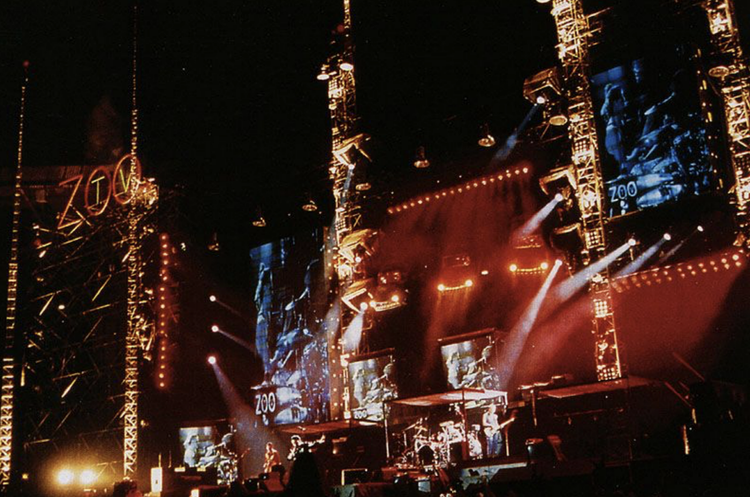 What does it mean for the human experience when technology is blurring the lines between real life and entertainment, past and present, experience and memory? That is the central question that U2 were exploring with their 1991–93 tour, Zoo TV.
Aug 30, 2020
7 min read